Delivery robots now in use at Upstate Medical University 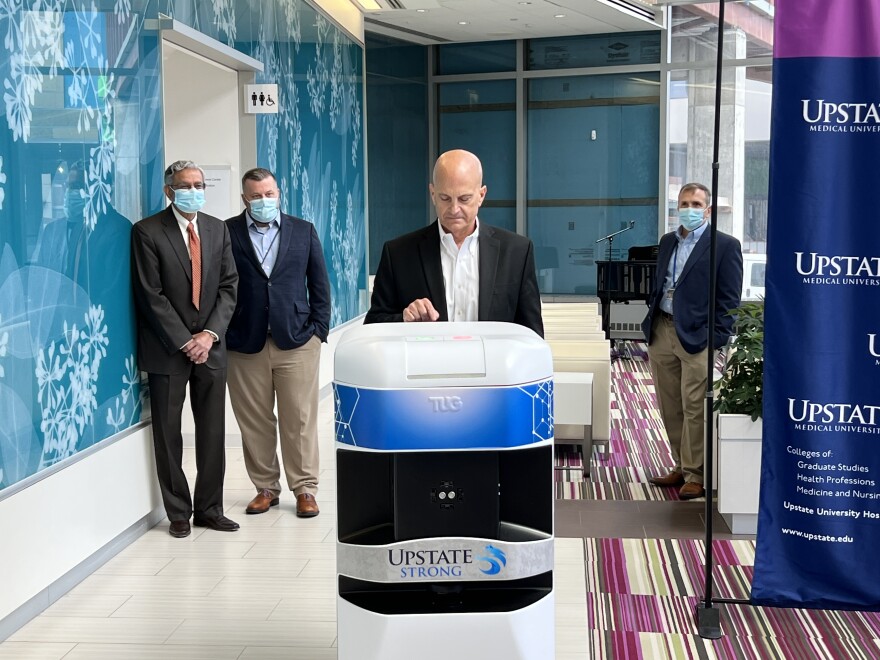 The overburdened staff at Upstate Medical University is getting some help. And it looks very futuristic. This week, robots began delivering everything from prescription medicines to supplies across the Syracuse campus.

Imagine a nurse needs some IV fluids for a patient. Instead of running to a supply closet, down the hall, a four-foot tall robot does the job.

A fleet of 14 of these TUG robots have been deployed at the hospital as of Monday, according to Upstate’s CEO Robert Corona.

“It’s part of a big effort to have autonomous machines assisting our staff,” Corona said.

These robots are kind of like a self-driving car maneuvering through the hospital, using laser, lidar, sonar and infrared sensors to navigate the halls. It is small enough to maneuver around obstacles and can get on and off of the elevators. The boxy machines hold several drawers that can safely carry things like medical supplies, linens, and meals. And they are secure, only accessible by fingerprint ID technology. Among those happy to see the robots roaming the halls is pharmacist Joseph Burczinski.

“What the TUG robot does for us, is give us time,” Burczinski said. “Every hour that we can claw back from distributing drugs and running drugs, is another hour we can give to patient care. Big win.”

Streamlining medical care is more important now than ever. Hospitals across the country are facing nursing and medical personnel shortages. Upstate alone has had continued nursing vacancies in the hundreds , that has forced it to cut back on hospital beds. Corona says this can only help.

“Our nurses and other staff especially have been working extraordinarily hard, and this takes away some of the burden,” Corona said. “There’s no need for a nurse for instance to be running after supplies, and running to the pharmacy for drugs or transporting labs, that can all be done by a robot.”

This is only part of Upstate’s transition of becoming a smart hospital. Its drone program is working towards delivering items to patients outside the hospital, and they are expecting a robot that looks like a dog, that can go up and down stairs, to join the fleet of 14 TUG robots. Steve Roberts of the hospital’s autonomous machines department said the possibilities are endless.

“The whole goal is to bring in technology to help our patients, help our staff,” Roberts said. “So this is one of the initiatives they’ve taken on to become a smarter hospital. So we’re smart and I think we’re getting smarter.”