In its recently released Annual Report, the President’s Council of Economic Advisors points to robotics as a key opportunity for growth in many U.S. industries. It also challenges concerns that automation could threaten the conventional work force, and instead, outlines three ways growth in the robotics field benefits American workers.

Labor productivity growth – measured as output per hour — can lead to higher living standards via higher wages, lower prices, and a greater variety of products. This growth results from increases in capital, improvements in labor quality, and “total factor productivity” (TFP, or what the U.S. Bureau of Labor Statistics formally refers to as multifactor productivity). The first source, physical capital, fuels productivity growth through investments in machines, tools, computers, factories, infrastruc­ture, robotics innovations and other items that are used to produce new output. The second source, improved labor quality, comes from greater education and training.

According to the Report, the most important source of increased productivity growth overall is the third measurement—total factor productivity (TFP). TFP refers to the result of labor and capital working together. For example, taking the same workers and the same equipment and changing the way that the workers use the equipment to get more output.

When TFP increases, a company experiences higher productivity, even when capital and labor remain constant. Such TFP improvements happen when innovators create new products or make improvements to existing products, often in response to market incentives. When the resultant gains from productivity growth is shared across the workforce, employees enjoy better working conditions and higher wages.

It’s no secret that competition causes companies to invest in new technologies which lower costs and improve product quality. Startups are a critical pathway for the commercializa­tion of innovative new products. Startups, or the possibility of entry by a startup, also create incentives for established firms to innovate and reduce costs, which in turn drives growth.  In the case of Aethon, it began with a four person team to design a robot to serve the needs of hospitals in the United States.  Now, Aethon has grown in healthcare but is also growing in the global industrial automation segment.   We are excited to be part of Pittsburgh’s renaissance as it moves to a high-tech economy and becomes a major center for robotic innovation as reported by Katie Couric in this Yahoo! report.

In addition to commercializing new technologies, startups provide jobs. In 2013, startups accounted for over 2 million new jobs compared with established firms that accounted for over 8 million new jobs. (U.S. Census Bureau’s Business Dynamics Statistics.)  While many startups fail, those that remain in business tend to grow, creating demand for new jobs. Thus, a healthy environment for startups sets the stage for current and future job growth.

Robots, like other types of automation, can be either complements to, or substitutes for, conventional labor. “Smart warehouse” applications involve varying amounts of automation to complement the work done by warehouse fulfillment workers. Examples include LED lights on shelves that light up when a worker reaches the appropriate location and mobile robots that bring inventory from the floor to a central place for packaging (Field 2015; Garfield 2016). The latter example realigns employees away from product-retrieval tasks and focuses them instead on the inventory-sorting phase of the process, for which humans have a comparative advantage over machinery.  Aethon’s TUG allows the transportation tasks of materials to be automated while workers can focus on higher-value work.  In the case of hospitals, this means clinical staff spends more time on patient care and less time shuttling or searching for materials.  In manufacturing, this means workers can be focused on production or quality related tasks. 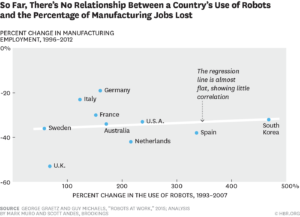 One of the few studies on the economic impact of robots finds that higher levels of robot density within an industry lead to higher wages in that industry (Graetz and Michaels 2015), suggesting that robots are complements to labor. Automation history has revealed that while there is some substitution of automation for human labor, complementary jobs are often created and new work roles emerge to develop and maintain the new technology.  The adjacent chart illustrates that there is no relationship between the use of use of robotics and jobs lost.

The Report comments, “While industrial robots have the potential to drive productivity growth in the United States, it is less clear how this growth will affect workers. One view is that robots will take substantial numbers of jobs away from humans, leaving them technologically unemployed—either in blissful leisure or, in many popular accounts, suffering from the lack of a job. Most economists consider either scenario unlikely because several centuries of innovation have shown that, even as machines have been able to increas­ingly do tasks humans used to do, this leads humans to have higher incomes, consume more, and creates jobs for almost everyone who wants them. In other words, as workers have historically been displaced by technological innovations, they have moved into new jobs, often requiring more complex tasks or greater levels of independent judgment.”

A Harvard Business Review article titled “Robots Seem to Be Improving Productivity, Not Costing Jobs”  discusses their report and puts it into perspective nicely:  “Graetz and Michaels calculate, for example, that robotics have of late increased labor productivity by about 0.35% annually — or by about the same amount as did the steam engine, a classic example of a GPT, during the years 1850 to 1910.”   This level of performance is exciting and very positive,  yet those measures ignore the last eight years of growth in robotics!  While industrial robots have been in use for decades, we are beginning a new wave of robotic innovation that includes autonomy and interdependence.  If we are on the verge of improvements to productivity that are greater than the steam engine and show every indication of being as large if not larger than the gains in IT innovation, then robotics are an exciting prospect to economies indeed.