Patience is a Virtue in Disruptive Innovation

Innovation is simultaneously natural and unnatural. The development of new technologies is inevitable, but it doesn’t happen on its own. 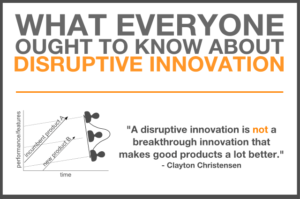 Rolling out useful, innovative technology is no easy task, often requiring years of market research, hardware and software development, a stable of highly trained talent, and an ability to integrate enabling technologies into these novel solutions.  Most of all, innovation requires a vision,  deep customer insight and a focus on how the innovation creates new value in the marketplace.  This last part, creating new value, is what separates invention from truly disruptive innovation.

Thomas Edison provides an axiom of innovation:  “Anything that won’t sell, I don’t want to invent.  Its sales is proof of utility, and utility is success.”  Disruptive innovations take time to demonstrate utility, but ultimately they prove themselves far more useful than originally expected.  So (naturally), these inventions may take longer to come to full fruition than popular media may indicate.

In 1964, legendary science writer Isaac Asimov offered The New York Times some predictions as to what society in 2014 might look like—among his predictions were that kitchens would be preparing “automeals” and that all appliances would be wireless, powered by radioisotopes. Of course, Asimov was wrong, if only in the sense that these inventions are not in the market—yet. But that doesn’t mean they’ll never come.

“Disruptive innovation” is a term that has long been used to describe a new market that disrupts an existing one by displacing existing technology, and we see examples of it all around us every day: Email has usurped postal mail, smartphones and tablets are replacing personal computers and laptops, and downloadable media is replacing CDs and DVDs. But sometimes, true disruptive innovation can take longer than expected.

In his 2003 book, The Innovator’s Solution: Creating and Sustaining Successful Growth, Harvard business professor and foremost authority on disruptive innovation,
made an important distinction, between what he calls “low-end disruption” and “new market disruption.” While low-end disruption typically involves a “good enough” product that aims to capitalize on the shortcomings of existing technologies, new market disruption is a much more intensive process, capitalizing on new or emerging markets not currently being served in a given industry.

At Aethon, we fit into the latter category.  Service robotics is quickly emerging as a growth industry, but it took “market makers” to have a vision and develop viable technology aimed to solve specific problems, and early adopters to start the wave of acceptance.   We didn’t look to make a “faster horse”, but rather a new mode of transporting goods and materials within organizations.  Our autonomous mobile robots represent a new market in healthcare technology: automated supply and medication delivery.  And it took time.

In a recent interview with ComputerWorld, iRobot co-founder and former MIT robotics professor, Rodney Brooks, explained why robotics might seem to be progressing slower than initially predicted: “We’ve done 50 years of research and it hasn’t changed the world. Why not? Robotics is just really, really hard.”  Matching the capabilities of the technology with real-world utility is the hardest part.

It’s clear the market has woken up.  Although some of today’s robotics experts might see robotic innovation as lagging behind the expectations of yesteryear, robots are making a difference already—by helping people and businesses save time and labor, helping the disabled stay connected, and helping hospitals make the most of their resources.  A dialogue about the role robotics will play in our workplace is growing as a result.  A recent blog posting on Harvard Business Review titled “More Robots Won’t Mean Fewer Jobs” is a brief point of view article on how we should see robots as part of our work environments.

Disruptive innovations requires an exchange of invention and value with a willing participant who is able to generate greater benefit than the overall cost or effort involved.  But, it also requires resetting expectations, behaviors and norms.  When the latter starts to change, things really start happening.  We are in that time with robotics.