Make no mistake, we are in the midst of a revolution that is no less remarkable than the one of our history books. Never before has the production of things (operation technology) been so connected with the management of information (information technology).

It’s really a shame the term “THE Industrial Revolution” has already been used to describe the transition to new manufacturing processes from 1760 to the early 1800s. While the departure from hand production methods to machines, the advent of chemical manufacturing and the utilization of water and steam power were indeed a “revolution,” it leaves us with lackluster descriptives to describe our current revolution, like:  Industry 4.0, Connected Enterprise, SMART Manufacturing, Smart Factory, Manufacturing 4.0; Internet of Everything, and (wait for it…) Internet of Things for Manufacturing. And even the second and third “revolutions” get so much less press than their famous predecessor. 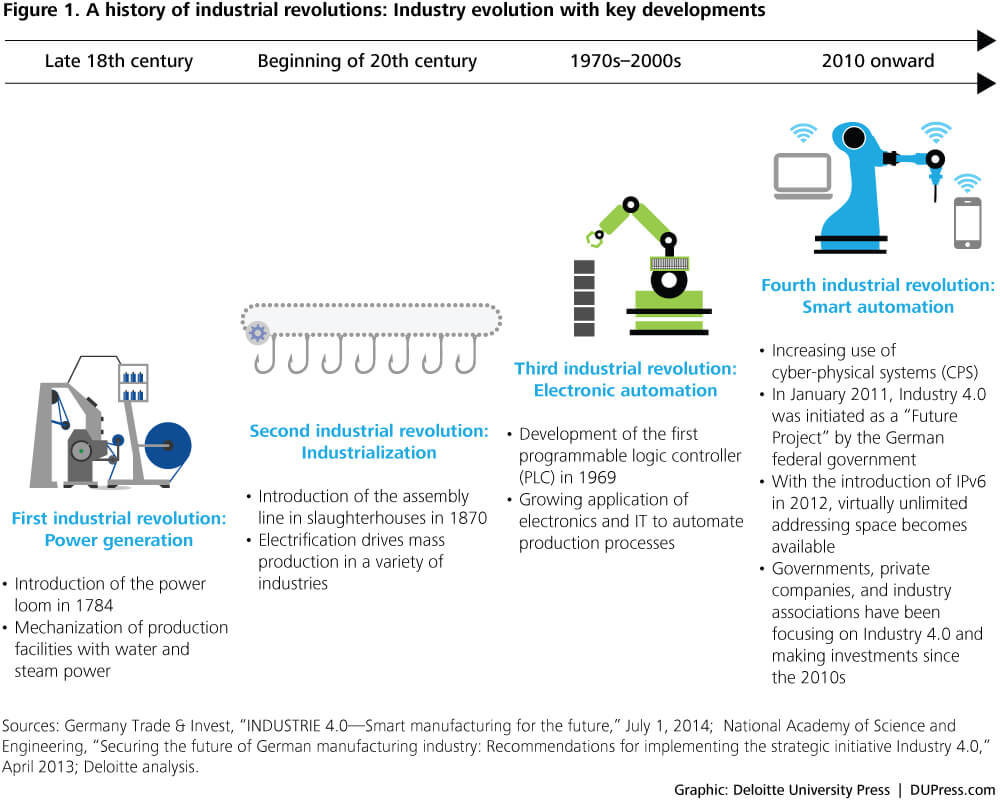 In its recent report, Industry 4.0 and Manufacturing Ecosystems, Deloitte paints the picture of the challenge and opportunity facing today’s manufacturers.  “Advanced manufacturing—in the form of additive manufacturing, advanced materials, smart, automated machines, and other technologies—is ushering in a new age of physical production. At the same time, increased connectivity and ever more sophisticated data-gathering and analytics capabilities enabled by the Internet of Things (IoT) have led to a shift toward an information-based economy. With the IoT, data, in addition to physical objects, are a source of value—and connectivity makes it possible to build smarter supply chains, manufacturing processes, and even end-to-end ecosystems.”

IoT is revolutionizing logistics and supply chain management, providing unparalleled  operational transparency and efficiency. While it changes the way organizations liaise with customers and suppliers, the resulting increase in quality and reliability paired with cost and resource savings is well worth any growing pains. 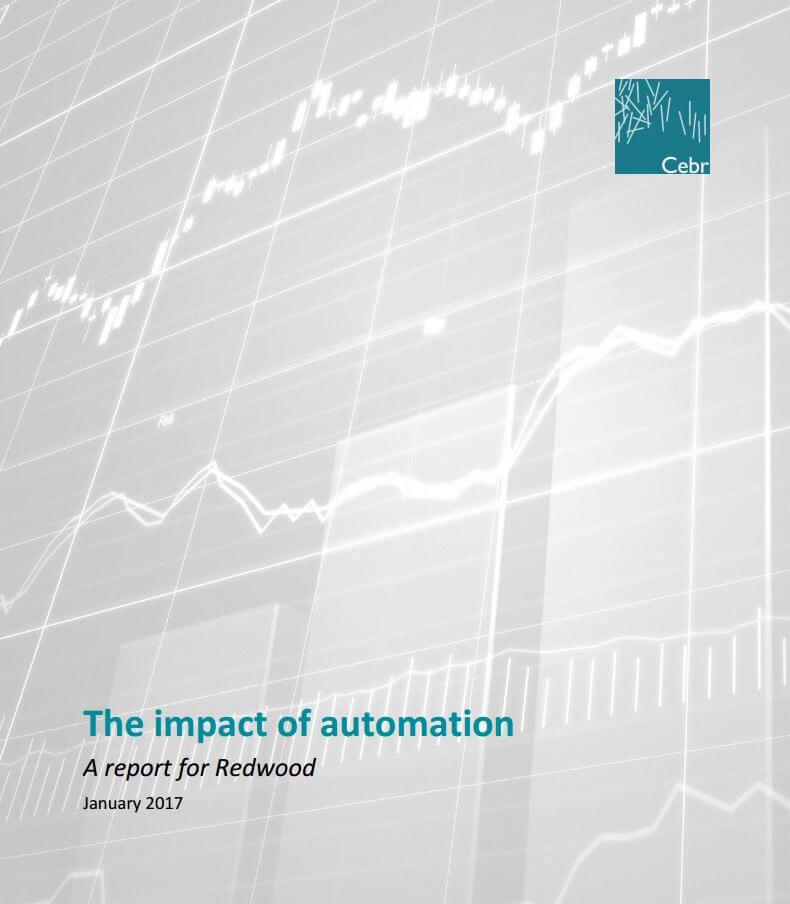 According to a new report from the Centre of Economic Business Research (CEBR), investment in robotics has a greater positive impact on the economy than financial services, construction or real estate. The study focuses on the impact of robotics automation on economic development from 1993 to 2015. It includes 23 countries that are part of the OECD (Organisation for Economic Co-operation and Development), a group of countries with highly developed economies and democratic governments. The new report finds that the US is currently leading the way with an estimated robotics stock of $732 billion.

The study found that higher numbers of robots were associated with higher labor productivity and increased economic development. This is quite contrary to the widespread notion that robots replace human workers.  While they certainly displace jobs, industrial robots can also give companies new growth opportunities. CEBR economist David Whitaker explains: “Industrial robots and their installation can be associated with around 10 percent of economic growth in OECD countries over the last 15 to 20 years, and that is expected to be a conservative estimate.” Whitaker suggests that when industrial robots take over the more mundane aspects of producing goods and services, then there is more room for the creative skills that only human workers can offer.

Deloitte puts it like this: “Manufacturing leaders must understand how both control systems in the factory and manufacturing execution systems—also known as operations technologies (OT)—and general corporate function and capability that synchronizes across functional systems—also known as information technologies (IT)—are co-evolving in ways that will bring profound opportunity and change to their business.”

It’s critical, though, that advances in manufacturing and the increasing world of data and information are actually connected in a meaningful way. The successful integration of Operations Technology and Information Technology is a key contributor to Aethon’s success in the automated, collaborative robotics sector.  With its patented Cloud Command Center, Aethon is able to remotely monitor, support and even control the TUG autonomous mobile robots installed at customers’ locations. Aethon’s command center is in constant communication with 500 TUGS installed in 140 locations.  Algorithms monitor the status of each TUG in real-time, and if a TUG might need help, an alert is sent to an on-duty support staff member.  They are able to connect to it over the internet using a secure VPN connection and can utilize the TUG’s onboard sensors to assess the situation.  They can even remotely drive the TUG and navigate it through the facility if necessary. 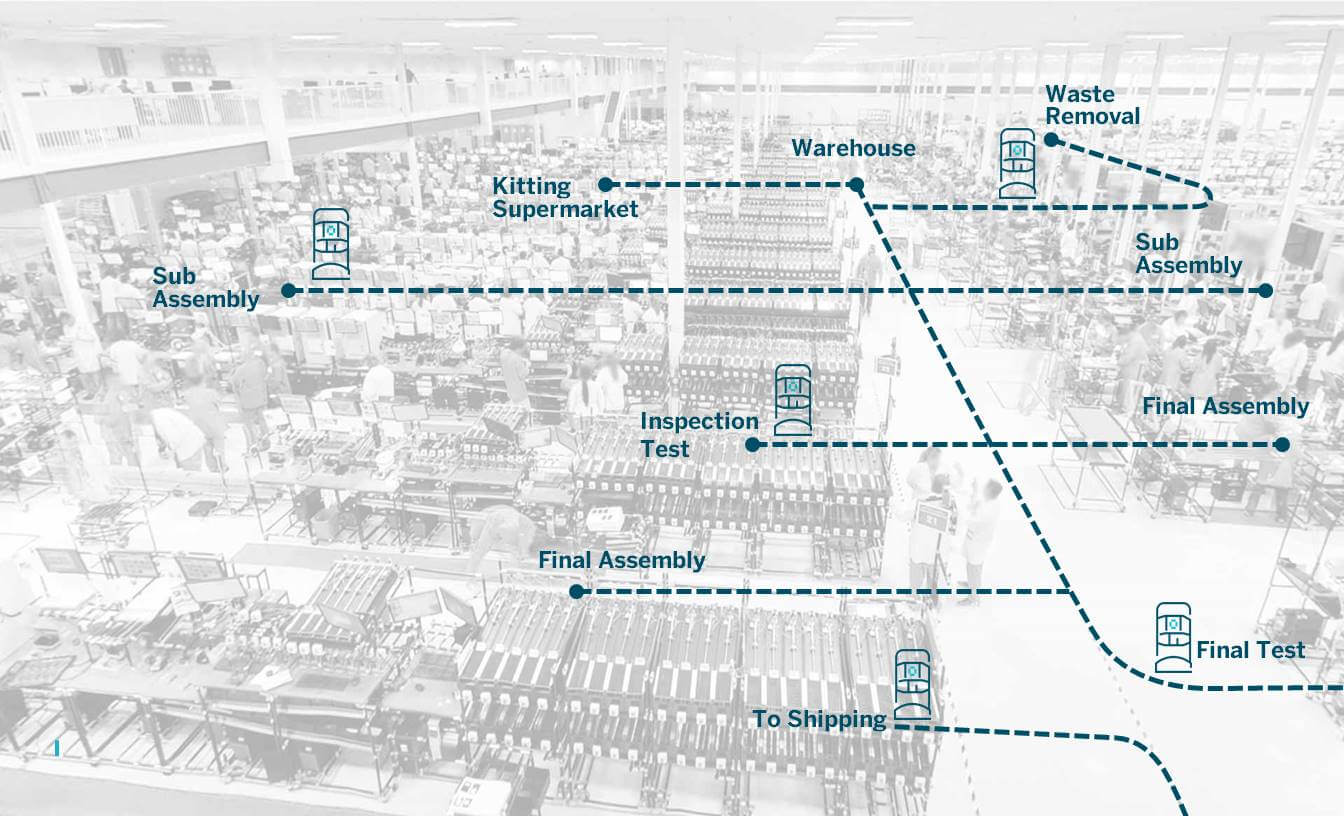 Aethon CEO Aldo Zini addressed the importance of OT and IT integration in the Connected Logistics & Supply Chain breakout at the Bosch Connected World conference in Berlin. In “Automating Intralogistics with Mobile Robots,” Zini said, “Our TUG robots connect islands of automation in manufacturing operations by autonomously transporting and delivering materials like raw materials, work in progress and finished goods. Without automated intralogistics, moving materials within an organization wastes significant resources and creates multiple inefficiencies throughout the operational chain. From reducing labor costs, storage space and cycle time to improving worker safety and productivity, the benefits of automated intralogistics are clear.” 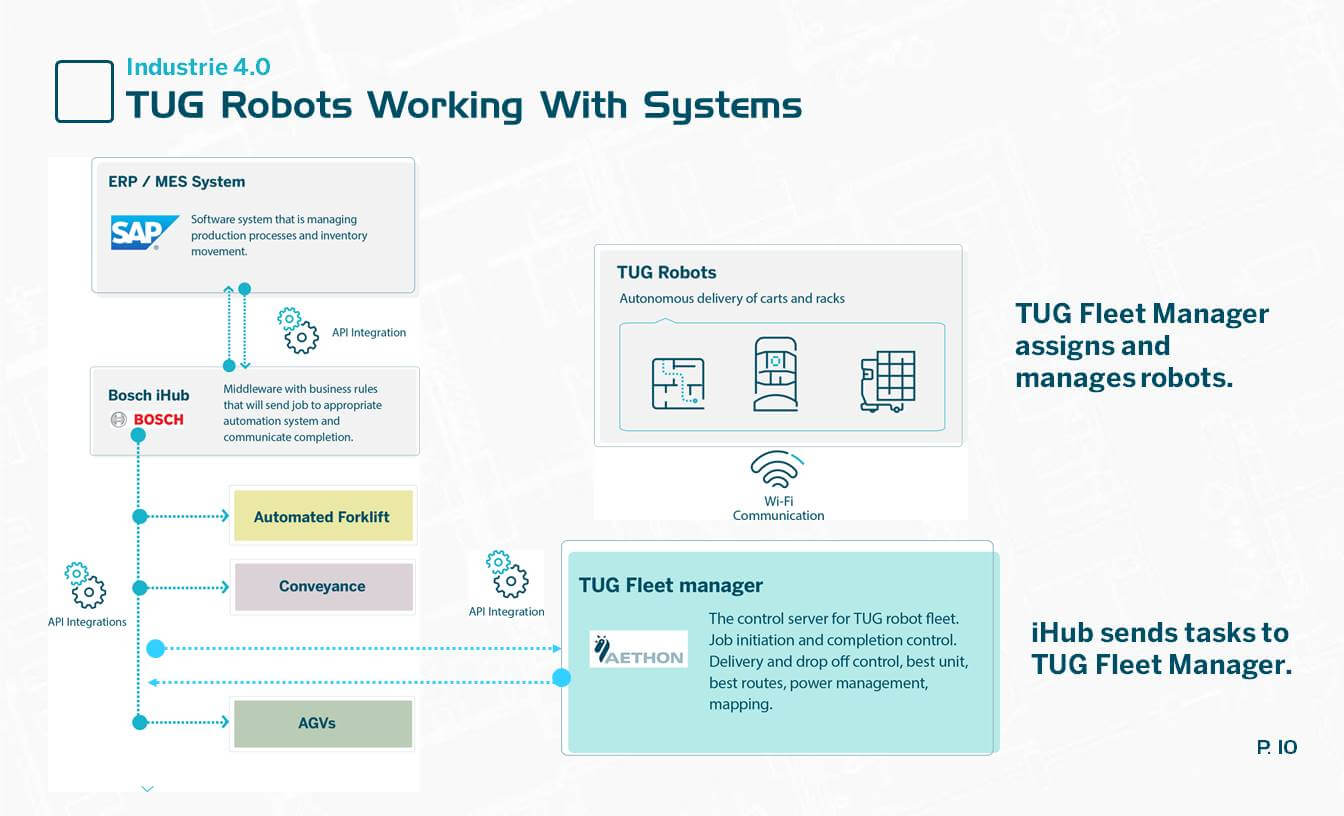 Aethon team members will be featured speakers on the role of collaborative robots in this new Industrial Revolution at the Automate 2017 Show in Chicago April 3-6. CEO Aldo Zini will speak on “Connecting Islands of Automation with Mobile Robotics” on Wednesday, April 5 at 8 AM and VP of Marketing, Tony Melanson will cover “Innovation Beyond Specifications” at 3 PM. 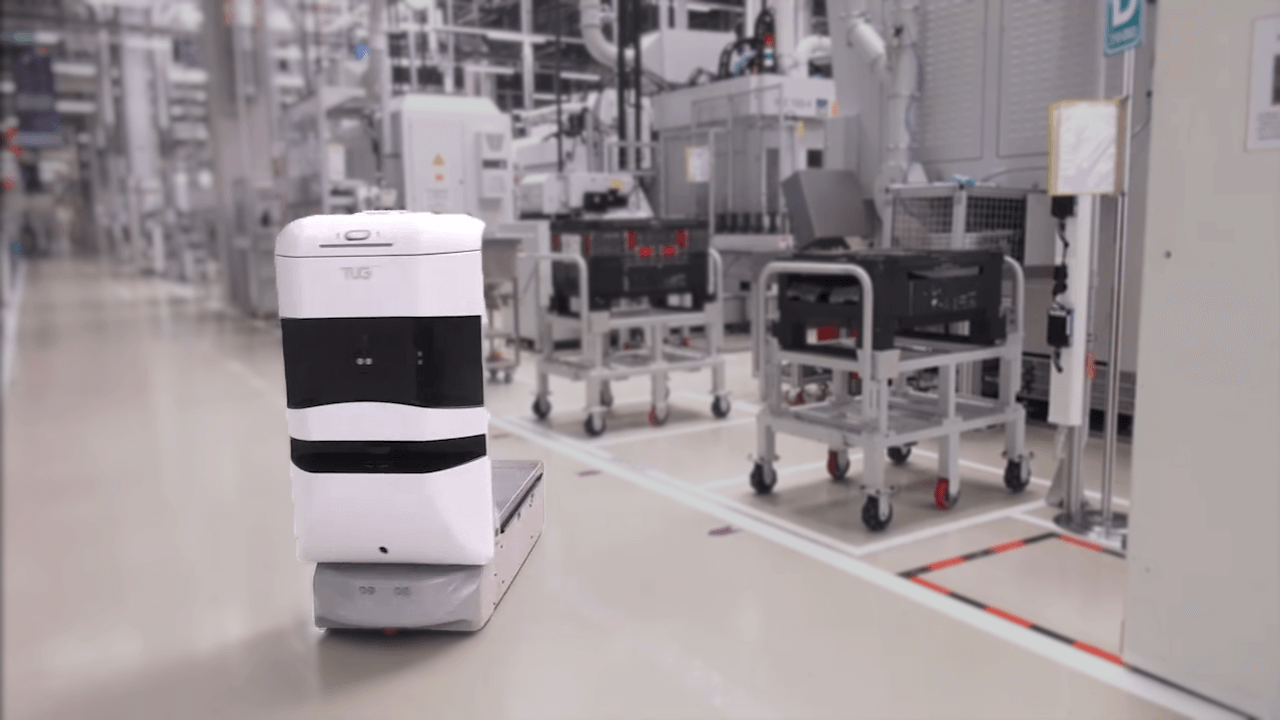 Also at the event, Aethon will showcase its newest TUG autonomous mobile robot products for manufacturing.  These new T3 robots provide omni-directional locomotion, automated pickup and dropoff and increased load capacity up to 1,400 lbs. Two robots will actively demonstrate their capabilities within the 20×50 booth (#1250). The team will also feature new software tools that allow manufacturing engineering staff to manage the robot fleet themselves.  This new functionality enables fleet-wide unattended management and remote control of all robots in a facility.