The definition of “collaboration” is “the action of working with someone to produce or create something.” And with one little change — replacing someone with some-thing — the function of many of today’s most successful forms of automation truly shine. 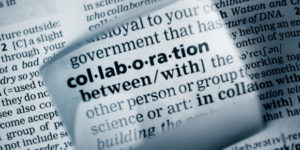 Collaborative robots don’t just work “around” people — they work with them and for them. They don’t replace human workers, but rather are integrated into the workforce, much like a new human employee would be. Aethon was recently mentioned in a Wall Street Journal article (“Before a Robot Takes Your Job, You’ll Be Working Side By Side”) that summarized a recent automation study by Forrester Research, Inc.

As automation and robotics take hold as essential business tools for the future, many fear that automation will replace people  — however, the primary takeaway from this report was that although a social revolution is coming, it’s not one to be feared. The firm predicts that automation will transform the nature of work, from intellectual tasks (such as checking a hospital’s crash cart medication trays for errors) — to physical tasks — (like towing assembly components across a manufacturer’s production floor).

TUG robots from Aethon, Amazon’s Kiva bots, a new upstart Fetch Robotics, and IBM’s Watson are all examples of automated tools that support human labor through collaboration, not replacement. Robots are now delivering room service to hotel guests, answering customer service questions at hardware stores, and leading customers down aisles in retail stores directly to the products they seek. In manufacturing and distribution environments, people still execute complex tasks like picking and packing — in the Forrester Research Report, the role of robotics’ is deemed the physical and analytical “heavy lifting.”

Of course, when collaborative robots work with people, safety is paramount, and today’s most successful case studies exhibit extraordinary attention to it.  It’s impractical to build automation into every aspect of the robot and every recovery mode.  Edge cases by nature are unpredictable and highly unstructured.  Some are simply confounding to an automated system.  So, collaborative mobile robots need ways for people to perform overrides to ensure the safety of staff and prevent costly delays in service or production (depending on the application).

More than a Robot

What’s interesting is that often it isn’t just the robot itself that needs to be collaborative.  The robot, as it turns out, needs to be collaborative with its machine “colleagues” and surroundings.  For example, The TUG autonomous mobile robot has enabling technology that allows it to respond to emergency conditions, use on-board sensors to avoid obstacles both animate and inanimate and the ability to call and ride the elevators.  They are also able to interact with production software systems such as SAP.  These production systems direct the work of the TUG and the robot provides status back to that system when their work is complete – thereby closing the loop automatically.

Robots (and any form of automation, for that matter) are most efficient when they work with and for people, not in their stead. Automated journalism for example, has the potential to save human writers time on market reports and sports articles — freeing them up to pursue more lucrative reporting opportunities. Supply-delivering hospital robots already make over 2 million annual deliveries on behalf of pharmacists and nurses, allowing them to focus their efforts on patient care and consultations.

Just like the nature of labor is changing, so is the nature of management. As more robots get hired, managers will inevitably learn to manage a workforce that is half-human, half-machine — but entirely more productive, agile, and profitable.