Read the full article on the Wall St. Journal Website  or the full text is provided below: 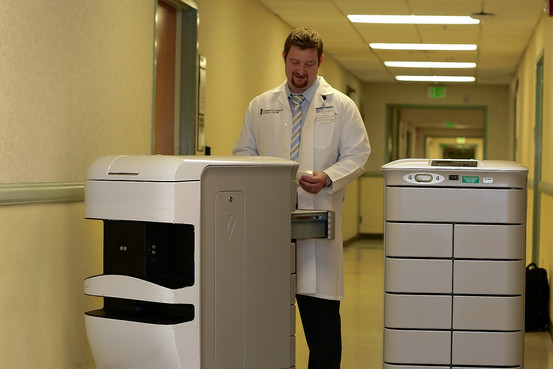 Hospitals have a drug problem. And they’re looking to technology to solve it.

The problem is the way medications are being handled—and mishandled—by the hospital pharmacies and out on the wards. Inventory management is inefficient, drugs are too often misplaced, and narcotic medications are prone to theft.

So hospitals are turning to high-tech solutions. In addition to password-protected dispensing machines, radio-frequency identification tags and roaming robots to deliver prescriptions securely to units, hospitals are adopting software that tracks every dose of medication to identify suspicious activity. Even older pneumatic-tube systems used to zip drugs around hospitals are being retrofitted with canisters that can only be unlocked when the intended recipient swipes a badge and enters a PIN at the receiving station.

The new systems help streamline operations and free pharmacists from the constant need to track down errant medication doses and sometimes to redispense the drugs. By making it easier for nurses to track medicines as well, the changes give nurses more time to spend with patients. Mercy Hospital in St. Louis, for example, estimates that a medication-tracking system developed by Aethon Inc.’s MedEx unit can save the hospital $600,000 a year just in time lost from pharmacists, technicians and nurses locating lost meds.

The cost of such systems varies. Aethon Chief Executive Aldo Zini says the MedEx tracking system costs about $1,000 a month but can cost more depending on use and the type of deliveries being tracked. The company’s Tug robots, which navigate their way around hospitals to deliver medications and other supplies, are leased for $1,500 to $2,000 a month.

Pharmacy chiefs say the new systems also help improve patient safety by helping to identify staffers who are siphoning drugs for their own use, a problem known as “diversion.” By some estimates, 15% of health-care professionals may be addicted to prescription drugs at some point in their career. Drugs may also be stolen by patients and visitors. Secure dispensing systems and tracking programs make it easier to meet increasingly strict federal regulations for documenting “chain of custody” for controlled substances.

Although there are no precise figures for drug diversion from hospitals, industry experts say drug-inventory losses cost hospitals millions of dollars a year. The most commonly diverted drugs are narcotic painkillers such as hydrocodone and morphine and the sedative fentanyl. In Minnesota, there were 250 reports to the Drug Enforcement Administration concerning theft or loss of controlled substances from 2005 to 2011. Reports grew to 52 in 2010 from 16 in 2006.

A 2011 study in the American Journal of Health-System Pharmacy noted that widespread adoption of automated dispensing machines has greatly improved the security of controlled substances and made it possible to electronically document the dispensing of doses and the disposal of unused medications and expired medications.

Kim New, a compliance specialist in charge of controlled-substance surveillance at the University of Tennessee Medical Center, says her program catches about one staffer a month diverting drugs. She relies on medication-surveillance reports prepared with software from Pandora Analytics, a unit of Omnicell Inc., OMCL +1.61% which also makes secure medication cabinets and other medication-dispensing and inventory-management systems. Pandora extracts data from medication-dispensing systems and presents it on a dashboard-style report.

“When I sit down and go over the medication-surveillance reports, I am looking for patterns of suspicious transactions,” Ms. New says.

For example, drugs now come in single-use vials, and if a patient is administered a smaller dose than what is in the vial, hospital staff are required to properly dispose of the rest, or “waste” it, following a protocol that includes a signature from a witness. In one case, Ms. New says, a nurse was waiting until the end of her shift, then disposing of multiple syringes at a time without following procedures. The nurse was warned, but the Pandora surveillance reports indicated that she started doing it again. Further investigation discovered that she was collecting leftover medication and injecting it in the parking lot before driving home, says Mr. New.

“This was also a community safety issue,” she says.

Joseph Adkins, a clinical pharmacist at Springhill Medical Center, in Mobile, Ala., says using Pandora is much faster than poring through spreadsheets to examine medication data. His facility conducted five investigations of suspicious activity in the first six months of using the software, and in three of those cases found diversion was taking place. Audits of the records of one nurse showed she was accessing an automated-medication cabinet when the unit was closed.

“If I am a patient, I don’t want a nurse who is potentially taking narcotics taking care of me, and as a pharmacist I don’t want that person working in my hospital,” Mr. Adkins says.

The software systems also allow Springhill to better manage inventory, for instance, by not stocking medications that are never used, or by keeping just enough of expensive drugs on hand to meet needs. “We want to keep enough so the nurses don’t run out, but not so much that we end up with the drugs expiring,” Mr. Adkins says.

At the University of Maryland Medical Center, Aethon’s Tug mobile robots deliver certain medications to nursing units. Pharmacy staffers print a label, scan and place the medication in one of the robot’s locked drawers, and then enter a destination into a software program that communicates wirelessly with the robot. The robot then navigates its way to the right unit, where a nurse uses a passcode and fingerprint scanner to retrieve the medication.

The center’s chief medical officer, Jonathan Gottlieb, says the system is part of a drive to “redesign the whole medication administration workflow, minimize defects, maximize safety and reduce costs.” Delivery reliability—how often the drugs arrive at the unit as promised—has increased by 23%, and delivery predictability—how often they get there within the time promised—has risen by 50%. The per-trip cost with a robot averages $2.40, down from $5.50 for hand delivery, hospital data shows, and in its first year the system freed up 6,123 hours that nurses previously spent tracking or retrieving medications.

Dr. Gottlieb says the robots, with names like Walter, Eddie and Gladys, go out several times a day. As they make their way around the hospital, visitors and staffers who aren’t familiar with them are often surprised, he says. “Jaws drop when they see them in the elevator.”

Ms. Landro is a Wall Street Journal assistant managing editor and writes the Informed Patient column. She can be reached at laura.landro@wsj.com.