As published at The Columbian by Will Campbell on June 4, 2022 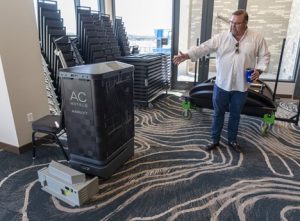 Perhaps what best shows the luxury at the AC Hotel by Marriott Vancouver Waterfront, is a box-like robot that transports food, towels and other items up and down elevators and through the hallways to guests’ rooms.

After the hotel’s June 15 soft opening, guests will occasionally see the robot zip around the building delivering towels or food. The front runner for the robot’s name is “Speed.”

Located at 333 W. Columbia Way, the hotel will have a grand opening party at the end of September after working out any bugs with Speed or its other features.

With amenities and views beyond what most hotels in Vancouver have offered, the AC Hotel will elevate Vancouver to a new level and attracting wealthier businesspeople and travelers to the city. It’s one of two higher-end waterfront hotels due to open soon. The other, Hotel Indigo, is expected to open in October, according to its website. 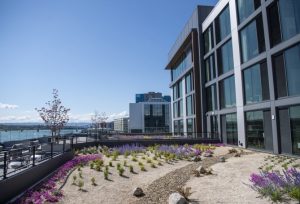 Guests will arrive at the front of the hotel, where valet is not yet part of the experience but will eventually be part of a hybrid valet and self-parking option. The self-parking garage is around the corner.

Upon entering the lobby, visitors will find a slanted wooden wall to the left, a large open bar and an unobstructed view of the water ahead and reception to the right.

Former Beaches head chef Tanner Poncik is leading the restaurant and catering in the hotel’s full kitchen. The food will be European fusion: mostly Spanish, with some Italian, German and Mediterranean. Poncik will serve dry-aged steaks as part of his menu.

There’s an outdoor seating area on the bottom level, where anyone on the waterfront can wander in, including cruise ship tourists embarking next door at the Port of Vancouver’s Terminal 1. There is seating for 162 patrons inside and 112 outside.

“When people come off the boats, this will be great,” said Rick Takach, CEO of Vesta Hospitality, the developer of the hotel.

The hotel also has two event spaces that will bring a more lavish business clientele to Vancouver: one on the bottom floor that can host up to 240 for dinner, and a seventh-floor space that can seat 125. The event space overlooks the river, the Interstate 5 Bridge and the rest of Terminal 1.

Even the public restrooms are higher-end; stalls feature floor-to-ceiling doors, each of which require a separate air vent and fire sprinkler head.

One of the unique aspects of the hotel is a history wall. Takach said he wanted to honor the site’s history of shipbuilding. There’s an old preserved wooden pier piling, historic pictures of the workers and a model ship of the vessels built at that spot, which during World War I was the Standifer shipyard. Local history enthusiast Pat Klinger, who died in April, helped Takach design the wall.

There are 153 spaces in the parking garage, and above the garage is an amenity deck, accessible from the hotel elevator, with a natural-looking landscape with native plants. It helped make the building a LEED gold-certified building, Takach said.

Costs of the hotel development exceed $50 million. It will create between 90 and 100 jobs.

The hotel is the first finished redevelopment project at the Port of Vancouver’s Terminal 1, which adjoins The Waterfront Vancouver. It will soon be joined by a number of nearby construction projects, including apartments, the ZoomInfo headquarters and potentially a new Interstate 5 bridge. A public market is also planned by the port for the old Red Lion site at some date in the future.

Kansas-based architecture firm DLR Group designed the AC Hotel by Marriott building. The building also benefitted from being in an opportunity zone, which began in 2018 as part of a federal program to boost private investment in underdeveloped areas.

Construction of the hotel began in August 2019, with extraction of 700 century-old wooden pilings, one of which is now visible on the building’s history wall.

“We’re excited to be open,” said Lenke, the general manager. “It’s been a labor of love.”